Our 2nd amendment is under attack! These bills are looking to “Ban” the sale of what the Democrat Lawmakers are calling “Assault Weapons“.

They describe “Assault Weapons” as ANY Semi-Automatic weapon that is a “Pistol“,”Rifle” or “Shotgun” and has a “Magazine“. If passed (which we would hope it would never get to the President for a veto anyway), it would mean, we could only buy “Revolvers“, “Bolt Action” and “Lever Action” weapons. And “YES”, they also say it would be illegal to possess a “SAW” (Semi Automatic Weapon).

My concern is this:

The Democrats are doing all they can to win the house and senate in November 2018. With enough votes, even if the President Vetos one or all of these bills, a recall vote “could” result in an overturn. They would need to have a super majority in the Senate, (67 votes) to do that.

The Democrat lawmakers have made their intentions well known. They want to “Repeal” the 2nd amendment.

We MUST start the fight now, or we will be seeing the start of a Revolution! It is coming! Look at the video below about Deerfield, IL. if you don’t believe me. This could be “Ground Zero”. Here is a link to the Village website about the ban. The village has hired the attorney firm of “Perkins Coie” to represent them. But the ban goes into effect on June 13th, 2018.

We need to plan a march into the Village of Deerfield! Who’s up for it?

So, call your Congressman and Senators and tell them you are against these bills. And let them know how you feel about Deerfield, IL. as well.

Vote “Republican” all the way down the November ballet in order to make change!

Deerfield, Illinois residents must turn in their guns

Deerfield, Illinois residents must turn in their guns 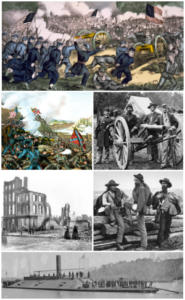 A MUST watch movie that the democrats in power DO NOT want the American People to watch!

Think of it. Schools are being manipulated to NOT teach our children the TRUTH about their history! From the Declaration of Independence, ratified on 7/4/1776 to the Constitution of the United States of America, ratified on 6/21/1788.

They are NOT properly teaching our children about how the Republican party, and how it was created to FREE THE SLAVES with our 1st Republican President, Abraham Lincoln, who signed the “Emancipation Proclamation” that freed the slaves.

The war had its origin in the factious issue of slavery, especially the extension of slavery into the western territories. Four years of intense combat left 620,000 to 750,000 soldiers dead, a higher number than the American casualties of World War I and World War II combined, and destroyed much of the South’s infrastructure. The Confederacy collapsed and slavery was abolished in the entire country. The Reconstruction Era (1863–1877) overlapped and followed the war, with its fitful process of restoring national unity, strengthening the national government, and guaranteeing civil rights to the freed slaves.

The Democratic Liberals in Government have been manipulating the press and every federally backed organization in existence since the end of the Civil war. They have been misleading Americans that join the Democratic Party for just as long.

Watch this movie and “HEAR” what is truly being spoken. We are all in trouble!

This Video Will Stop Gun Control If It Goes Viral!

This video and its message is AMAZING!

I think the owner of this gun store/range is preforming a great service to the entire country!

This video is a bit long, but is worth the view!

He is always spot on with what he says. Stopping the sale of AR-15’s in America is NOT going to stop Radical Islamic Terrorists (JiHadists) from killing us! They will find ways to get guns anyway! They will (and have) kill with home made bombs, knifes, trucks, planes and guns!